FIFA 20 FUT: Team of the Year Begins Today With the Attackers

FIFA 20 FUT: Team of the Year Begins Today With the Attackers FIFA 20 FUT Team of the Year is starting off with a bang in the form of 99 overall Lionel Messi leading the attackers. He joins 98 overall Kylian Mbappe and 97 overall Sadio Mane in the first release set. The developers really did lead with what will probably be the most hyped batch of players. We will seemingly get groupings of positions each day before we get one last batch of all the players released at the end of the week.

FUT Team Of The Year Costs

Messi currently sits at 5.7 million coins on PS4, according to FUTBin. So, yeah, the luck of a pack may be as close as many of us get to picking up 99 overall Messi this season. I am not advocating spending money on packs, of course, just saying it’s an exorbitant sum if you want to play with the best of the best. Mbappe actually outpaces Messi in cost on the PS4 as of this writing with his cost at 5.9 million coins. Mane is well behind that mark, but he’s still at 2.9 million as of today.

FUT Team Of The Year Challenges

The TOTY Challenge is an easy puzzle SBC for day one, and in a small way revolves around Messi. These are packs where you could technically pack a Team of the Year player, so hey, believe in the one in a million.

Starting with Flashback Iniesta, he is going to be completed via in-game challenges. 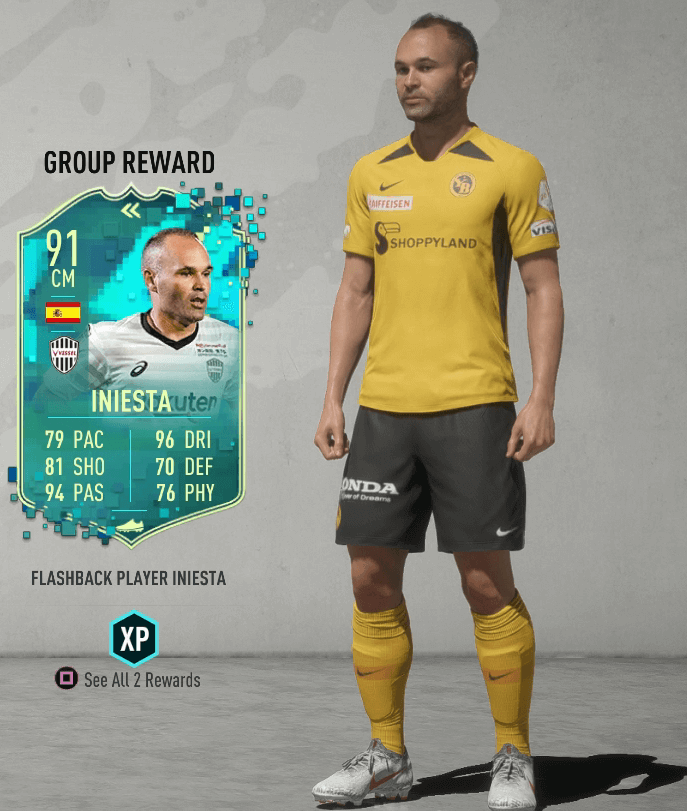 From West To East


If you have not yet done the player objectives for Moi Gomez, which relate to scoring with La Liga teams in Rivals wins, this is a good way to perhaps double dip. If you have already done the Moi Gomez objectives (like me), there’s a little extra grind involved.

As for the card itself, getting a 91 overall via not the worst grind I’ve seen this year is not a bad deal. He’s got four-star skills and four-star weak foot, and is still a relatively easy link even with him being in the J1 League. Flashback David Villa immediately comes to mind here, and overall Spain can really put out a great squad through the middle of the field at this point.

Iniesta has 99 vision, 98 short passing, 91 long passing and 98 composure so he really will deliver essentially any ball on time and with the right touch. He is certainly more offense-oriented so he might be better suited as a CAM, but you could put something like an Anchor chemistry style on him if you want to round out his pace, defense and physical attributes somewhat. Either way, he’s going to feel great on the ball, he just might be a little slow and weak.

Flashback Michael Neuer also takes a little of the shine away from FUT Team of the Year as one of the associated SBCs. He has a loan version available as well.

The two challenges associated with his SBC will run you about 110K as of tonight.


I will keep this short and sweet. What I always say with keepers is just use who you trust. There is a really wide range of outcomes with keepers, and I don’t think it’s really easy to figure out what even matters the most moment to moment with them. Some keepers with high ratings nobody likes, and then there’s lower-rated ones who seemingly stand on their head.

This is not an insane price for a high-rated keeper, but I would tend to shy away from paying for him. If anything, try out his loan card and go from there.

POTM Luis Suarez has two challenges associated with his card. The cost to complete this SBC is at about 130K right now, according to FUTBin.

The packs are untradeable, and overall I do not think it’s worth going for this SBC at this price. His 90 overall in-form is only about 70-73K, and this card is not changing who Suarez is as a player. He’s strong on the ball, has a good shot, and a little more pace is not going to make him some speedster.

The amount of quality strikers out there at this point is pronounced, and so you need to be a true Suarez fan to even pursue this card.