If the NHL Playoffs Started Today - First-Round Edition There is no doubt that when major events happen — though this one is kind of unprecedented — that sports play a major role in helping distract everyone from that particular crisis. Currently, we have really only one of the major sports, the NFL and its offseason moves, giving us something else to think about. However, for those of us who are hardcore NHL fans or even just hockey fans in general, we unfortunately haven’t had any real news to talk about since the league announced it would be “pausing” the season back on March 12. Well, we want hockey baby!

So while the league “paused” the season in hopes of resuming the season at some point in the future, why should we wait? Furthermore, while the NHL remains optimistic about resuming the 2019-2020 season, no one can really say for sure when or if that will happen. So, with no real answers on when or how the real NHL might come back, we here at Operation Sports decided to see what would happen if the NHL resumed play tomorrow and jumped right into the Stanley Cup Playoffs using the current standings. Our apologizes to fans of the current bubble teams who were battling for those final playoff spots. Perhaps, we will at a later time do a what-if simulation and see what would of happened if a team like the New York Rangers crept into the playoffs.

Our simulation will play out round by round over the next few weeks. Let’s take a look at how NHL 20 sees the action from round one playing out.


St. Louis forward Ryan O’Reilly led his team in goals (4), +/- (+3), game-winning goals (2), and penalty minutes (11), which included a five-minute major for boarding in Game 2. Blues goalie Jordan Binnington finished the series with 1 shutout, a .924% save percentage and a 2.50 goals against average.

For Nashville, the Predators managed to get points out of every skater except two defensemen. Forward Matt Duchene only managed one assist in the 7 games. Goaltender Pekka Rinne was pulled in two out of the seven games. 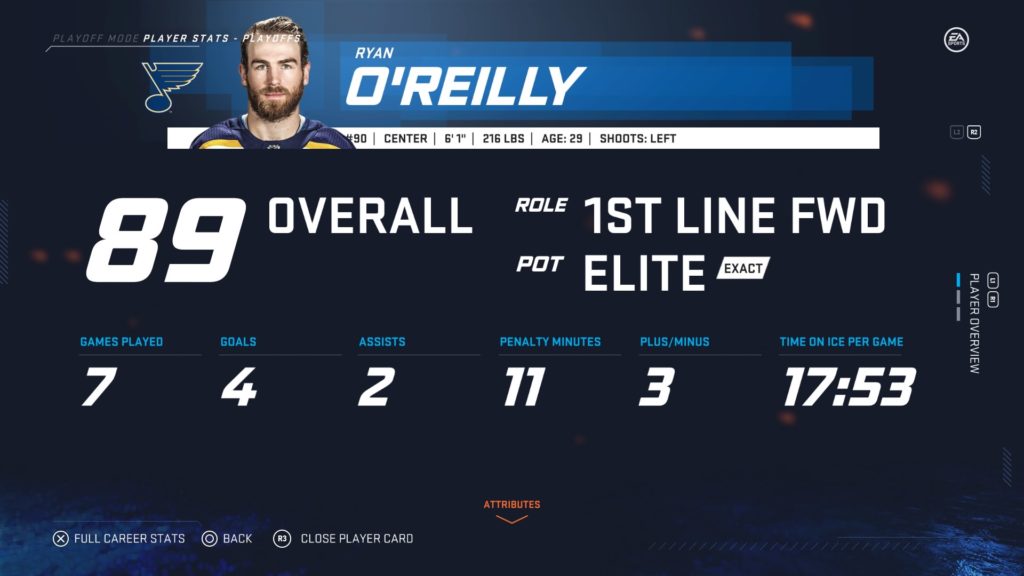 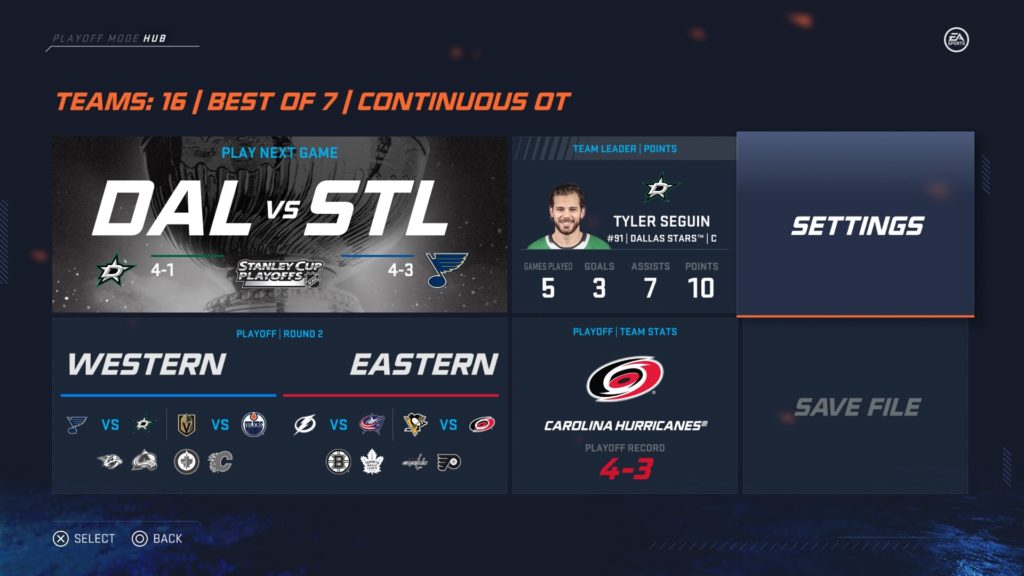 Dallas Stars forward Radek Faksa was the only Stars player to not record a point in the series. Tyler Seguin led all skaters with 10 points, 3 goals and 7 assists, after round one. The Stars’ 4.20 goals for per game and 2.20 goals against per game were both the best in the first round. Rookie Denis Gurianov ended the series with 3 goals and an assist. Also, Dallas managed to kill off 22 out of 22 penalties on the penalty kill.

Colorado’s offense only scored 11 goals, the fewest in round one, in the five-game series. Matt Nieto and J.T. Compher were they only two Avalanche skaters to score more than one goal in the series. 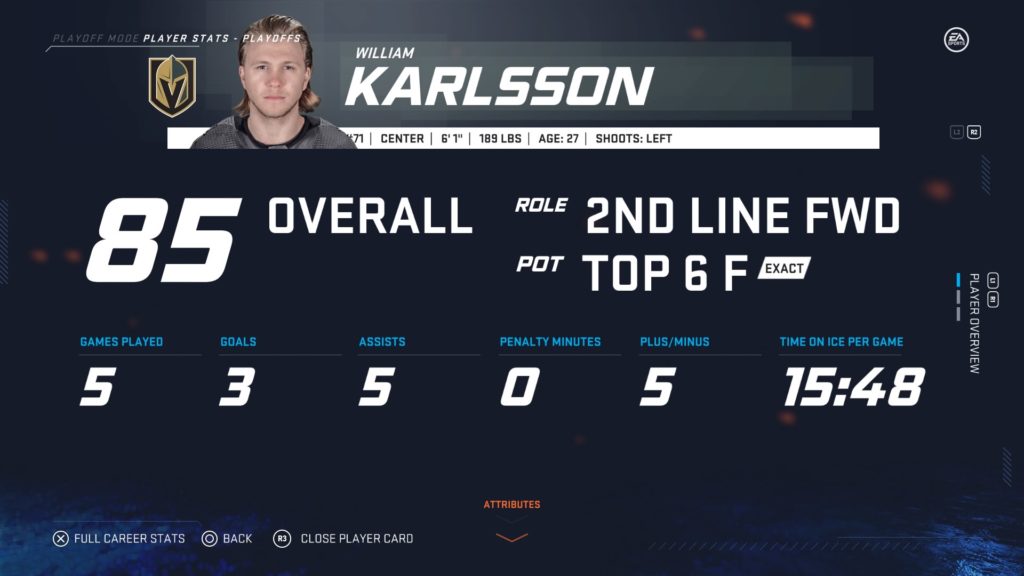 
The Golden Knights were the first team to advance to round two. Every skater who laced ’em up for the Golden Knights recorded at least one point in the five games. Max Pacioretty scored the series-clinching goal for Vegas. The Golden Knights trio of Karlsson, Pacioretty, Marchessault combined for a total of 20 points. Knights tough guy Ryan Reaves managed 4 points and a fighting major in the series. Defenseman Shea Theodore was a +9.

For Winnipeg, goaltender Connor Hellebuyck’s final numbers included a sub .900% save percentage and a 3.95 goals against average. The Winnipeg offense didn’t perform much better as top offensive guys Mark Scheifele, Kyle Connor, Blake Wheeler and Nikolaj Ehlers all only managed one goal each.

“The Battle of Alberta”


This series was the tightest checking series as the two teams combined for only 32 goals. Both Edmonton and Calgary each scored 16 goals for and gave up 16 against. The Flames were short-handed a league high 32 times, killing off 87.5% of opportunities against. Calgary’s Mikael Backlund scored the game-winning goal in double overtime in Game 6.

Leon Draisaitl led the way for Edmonton collecting 5 goals and 3 assists. Also, Draisaitl’s 29 shots on net led all skaters. Connor McDavid had a goal and 5 assists. 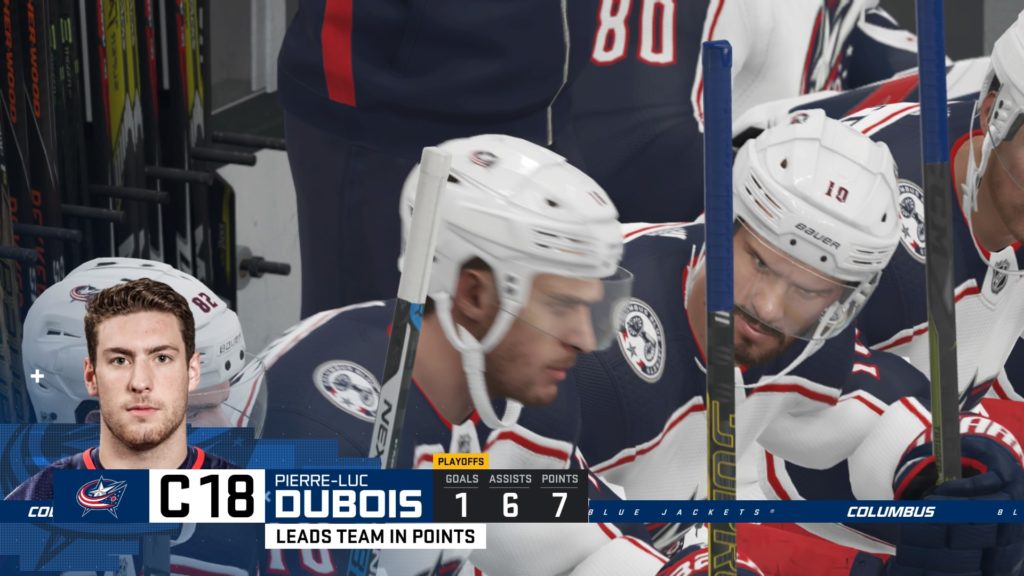 
Columbus was down 3-1 in the series, but managed to win three straight and upset the NHL’s top team from the regular season. Columbus rookie Emil Bemstrom scored the series-clinching goal and scored the game winner in Game 3 too. For the series, Bemstrom led the Jackets with 4 goals and finished second on the Jackets in points with 6. Columbus forwards Alexander Wennberg and Pierre-Luc Dubois both had 7 points in the series. Jackets netminder Elvis Merzlikins was fabulous in the series stopping 223 out of 239 shots. 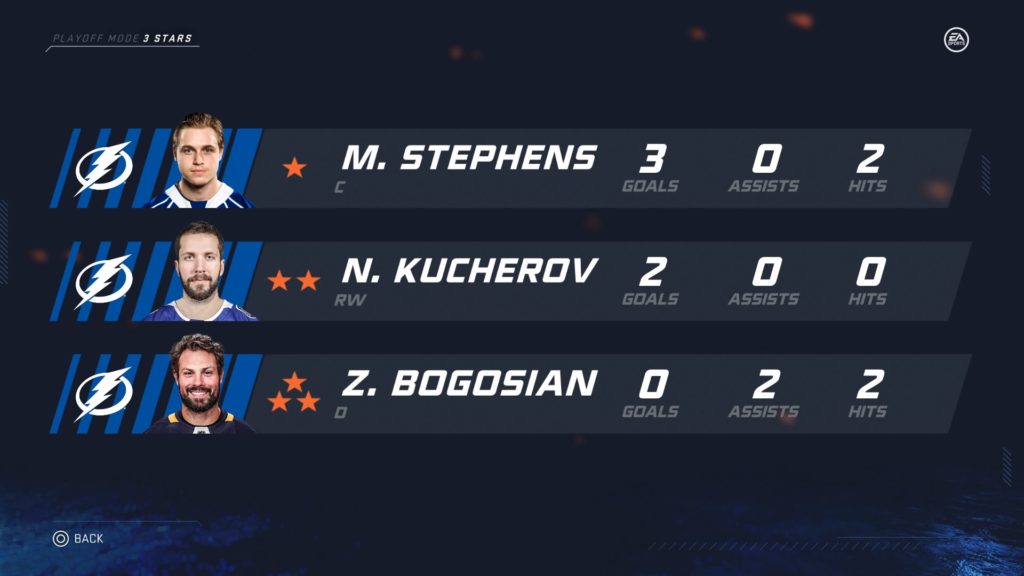 
Tampa Bay Lightning rookie Mitchell Stephens recorded a hat trick in Game 6 and scored the game winner in overtime in Game 1. Stephen’s teammate Tyler Johnson recorded his own hat trick in Game 3 of the series. Tampa, despite going the entire series without scoring a power-play goal (0-18), scored the most goals (22) in round one. Tampa Bay also finished the series with league’s worst penalty-kill percentage at 62.5%.

Jason Spezza, Mitch Marner and John Tavares all had 6 points in the series for the Maple Leafs. Franchise center Auston Matthews added 4 assists but was held goalless. Tyson Barrie and Rasmus Sandin were both a series-worst -6. Frederik Andersen finished with a .891% save percentage and a 3.63 goals against average.


Through the first two games of the series, Washington Capitals goaltender Braden Holtby stopped 64 of 64 shots. Alex Ovechkin had 5 goals, 3 assists and 29 shots in the series. Center Evgeny Kuznetsov also finished the series with 8 points, 2 goals and 6 assists. The Capitals scored the third-most goals in round one and still lost the series. 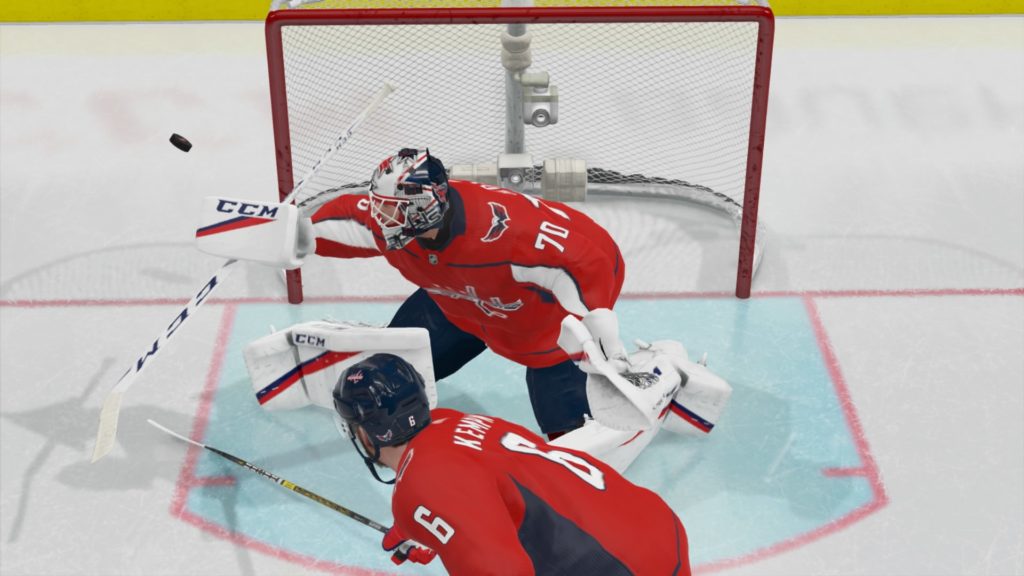 “The Battle of Pennsylvania” 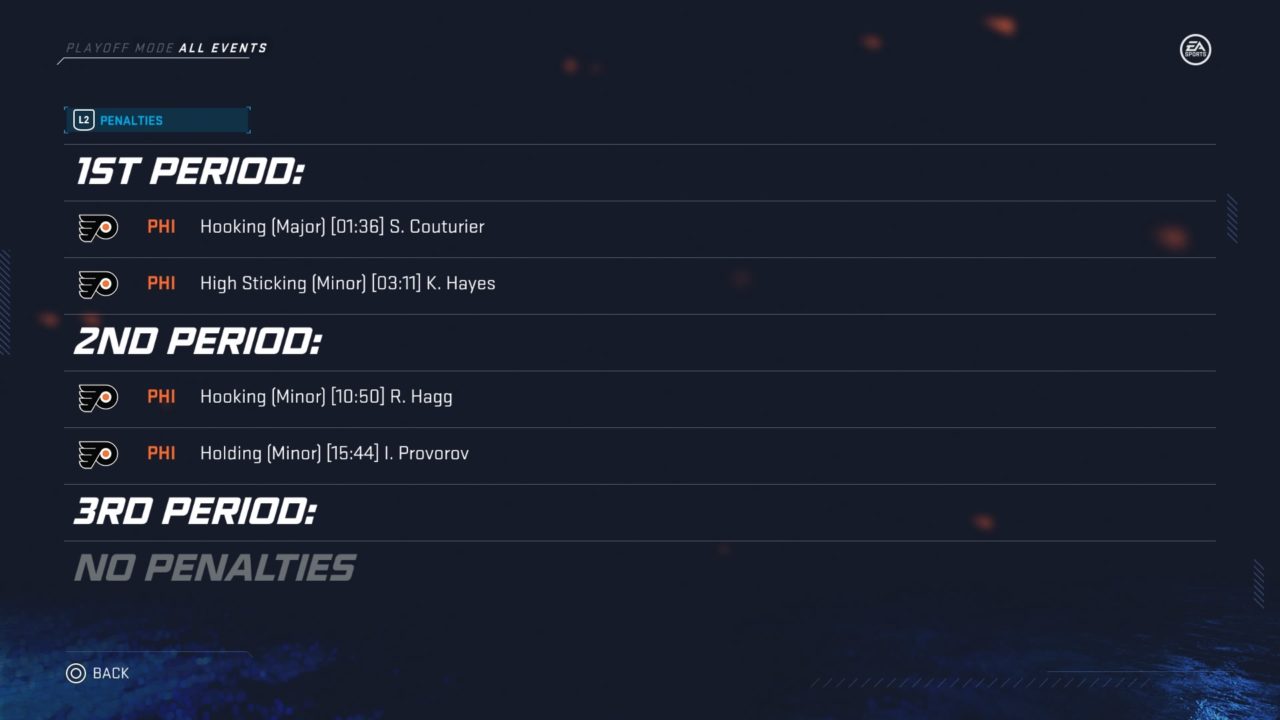 
In his first playoff action, Flyers goalie Carter Hart sported a .912% save percentage and a 3.14 goals against average. Sean Couturier and Claude Giroux each had 4 points to lead the Flyers. Sean Couturier also strangely received a five-minute major for hooking in Game 4 (as seen in the screenshot above). Flyers winger Jakub Voracek scored the overtime game winner in Game 1. Philly was 0-16 on the power play.

For the Penguins, Sidney Crosby led the way with 7 goals and an assist in the series. Trade deadline acquisitions Jason Zucker, Conor Sheary and Patrick Marleau combined for 14 points in the series. Goaltender Matt Murray closed out the series by stopping 31 out of 31 shots for the shutout. For the series, Murray had a .917% save percentage


Keep an eye out next week for the results from round 2. If the playoffs started today what would your predictions of round 1 look like? Let us know in the comments.​
The post If the NHL Playoffs Started Today - First-Round Edition appeared first on Operation Sports. Ryan https://www.operationsports.com/if-the-nhl-playoffs-started-today-first-round-edition/