Monster Jam Steel Titans 2 Review - Still Searching for an Identity It has been a couple years since Rainbow Studios and THQ initially developed and released the original Monster Jam Steel Titans. While there was fun to had in it, Steel Titans suffered from AI that was almost flawless while somehow still being mindless. There was also no option to restart a race, and it overall suffered from a lack of depth. So the task for Rainbow Studios was to deal with those issues and deliver a title that blends realism and arcade with strong physics, a larger variety of modes and options, and an AI that mimics how the average person would perform while playing. Let’s discuss how it came together in my Monster Jam Steel Titans 2 review. 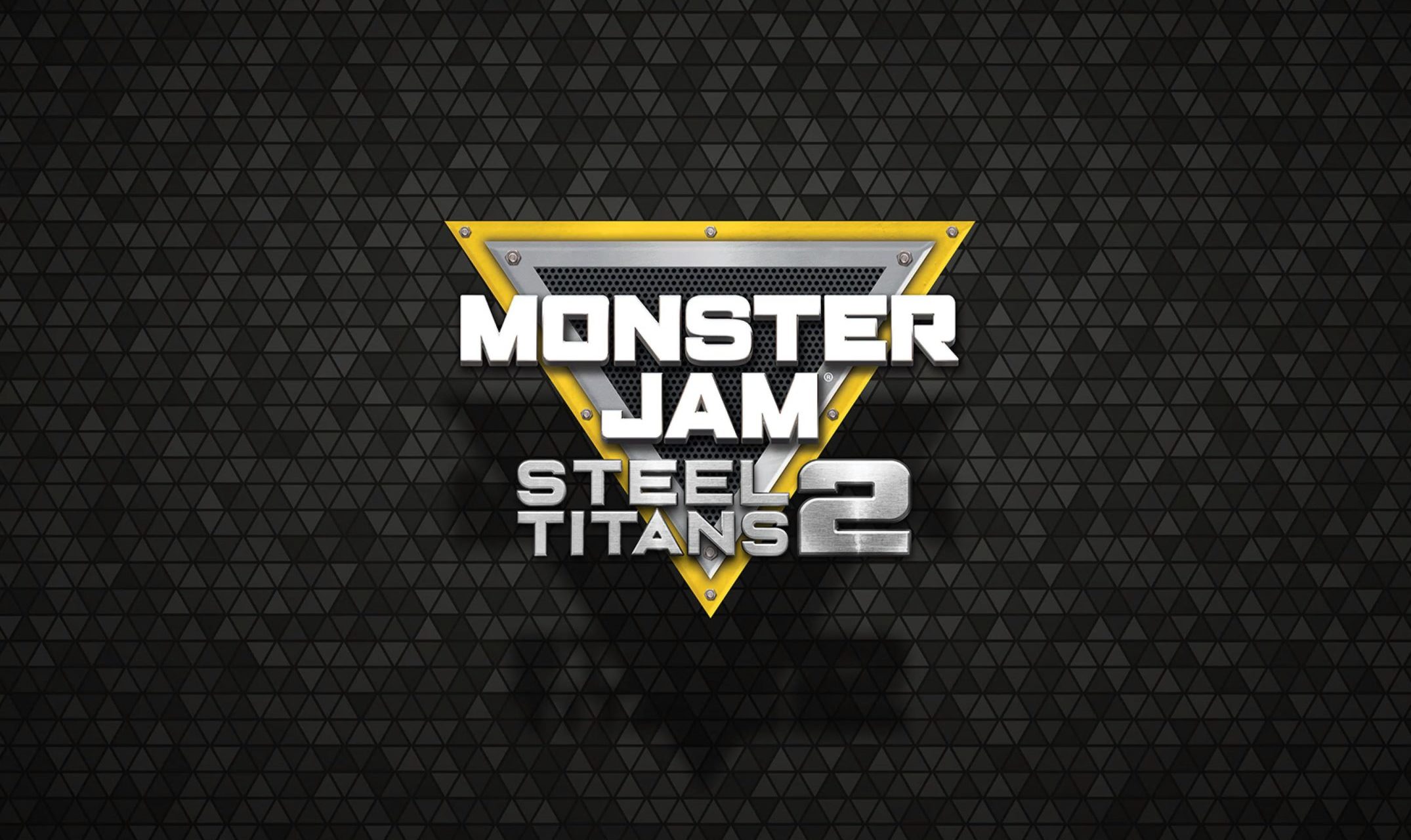 
It can’t be easy trying to replicate the feel of driving a 12 foot, 12,000 pound behemoth of a machine, and yet Rainbow Studios seems to have done a solid job of that in Monster Jam Steel Titans 2. That being said, I have never driven a monster truck, and I am guessing most of you are in the same boat. So I imagine the developers tried to provide a driving model and set of physics that would match up with what we imagine it feels like to drive these trucks while watching at shows or on television.

From the minute I sat behind the wheel, it was apparent that I was inside an absolute beast of a machine and the controls were going to take some time to get acclimated to. When performing a jump, maneuvering a sharp corner, or accomplishing one of the many other tasks at hand that were required in order to progress, I felt the weight that was underneath me during every move I made.

Another area where the developers delivered a high level of authenticity relates to how the trucks feel on top of the massive tires that are underneath the truck. There is a certain buoyancy that is instantly apparent the minute you start trying to maneuver the vehicle around one of the many courses or authentic stadiums that are included in the game.

As much fun as I had driving these trucks out onto the course, track, or stadium, there is one caveat to it all. There is a decent learning curve that comes with each vehicle because each truck offers different types of mobility, power, and maneuverability. Luckily, Rainbow Studios has included multiple practice areas with multiple items within each practice area, so you can take each truck out and learn how each one handles. 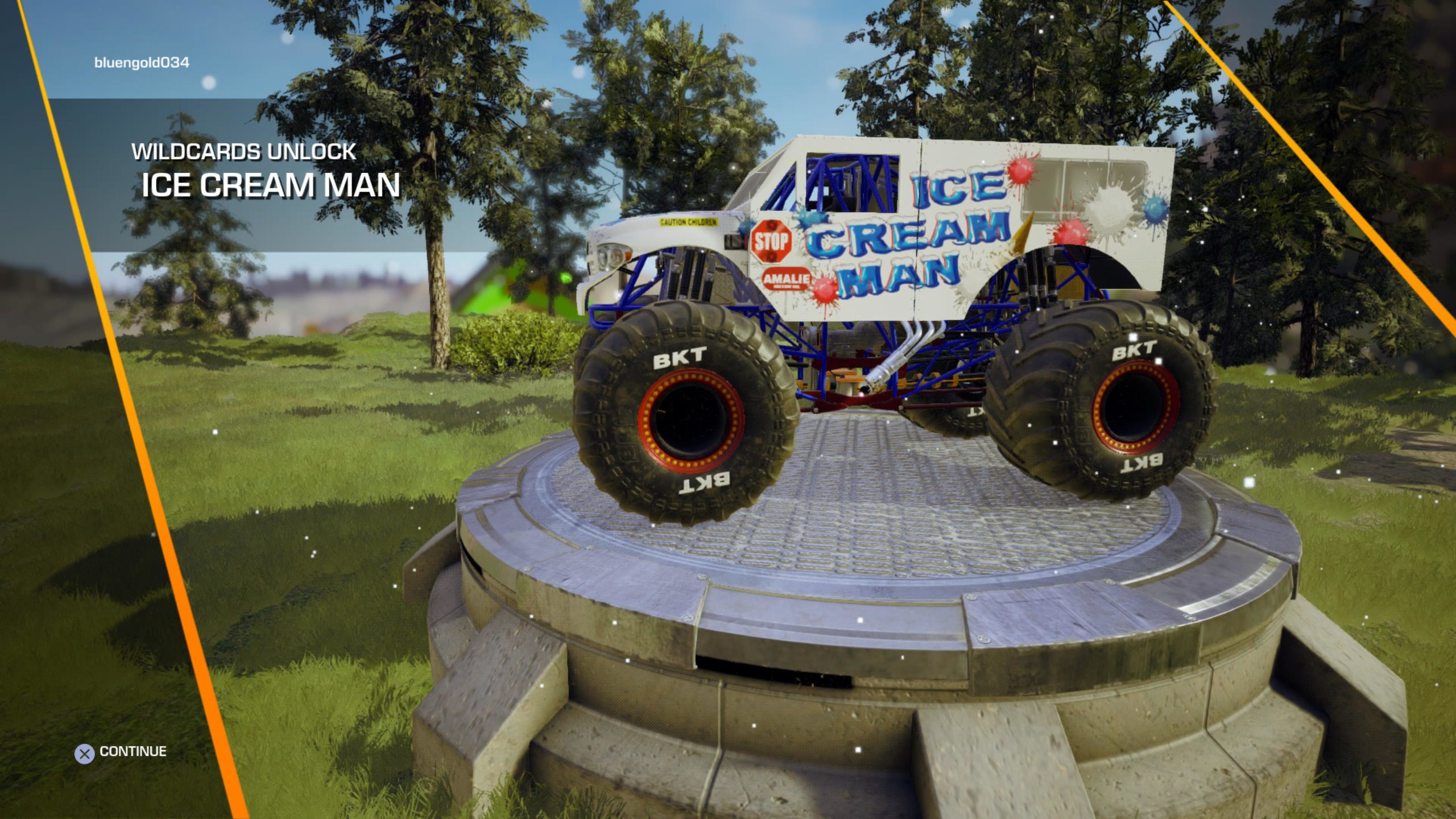 There are multiple unlockable options within Monster Jam Steel Titans 2. The items will range from different truck types to different locations to different competitions. There is an awful lot that is waiting to be accessed and for you to enjoy as your experience deepens.

What makes this aspect so enjoyable is that the content is so easy to unlock. You start off the game with the basics, and while that may not be a lot of fun in some people’s eyes, the path to unlocking new vehicles, locations, and competitions is not a difficult one to take.

Another fun and creative aspect of unlocking new items and areas here is the mere fact that some of the locations actually have mini-games built inside them that also, you guessed it, unlock different items, competitions, truck skins, and even more options.

Lastly, many of the unlockable trucks that are waiting to be unleashed are licensed and will be very familiar to those who are playing the game. This rings especially true if you have any working knowledge of the sport and the presentation that is put on at one of these events. So, the fact that I can unlock Gravedigger, Blue Thunder, Megalodon, and many more for use inside career mode, online, or in the playgrounds, makes coming back to play even more enticing. 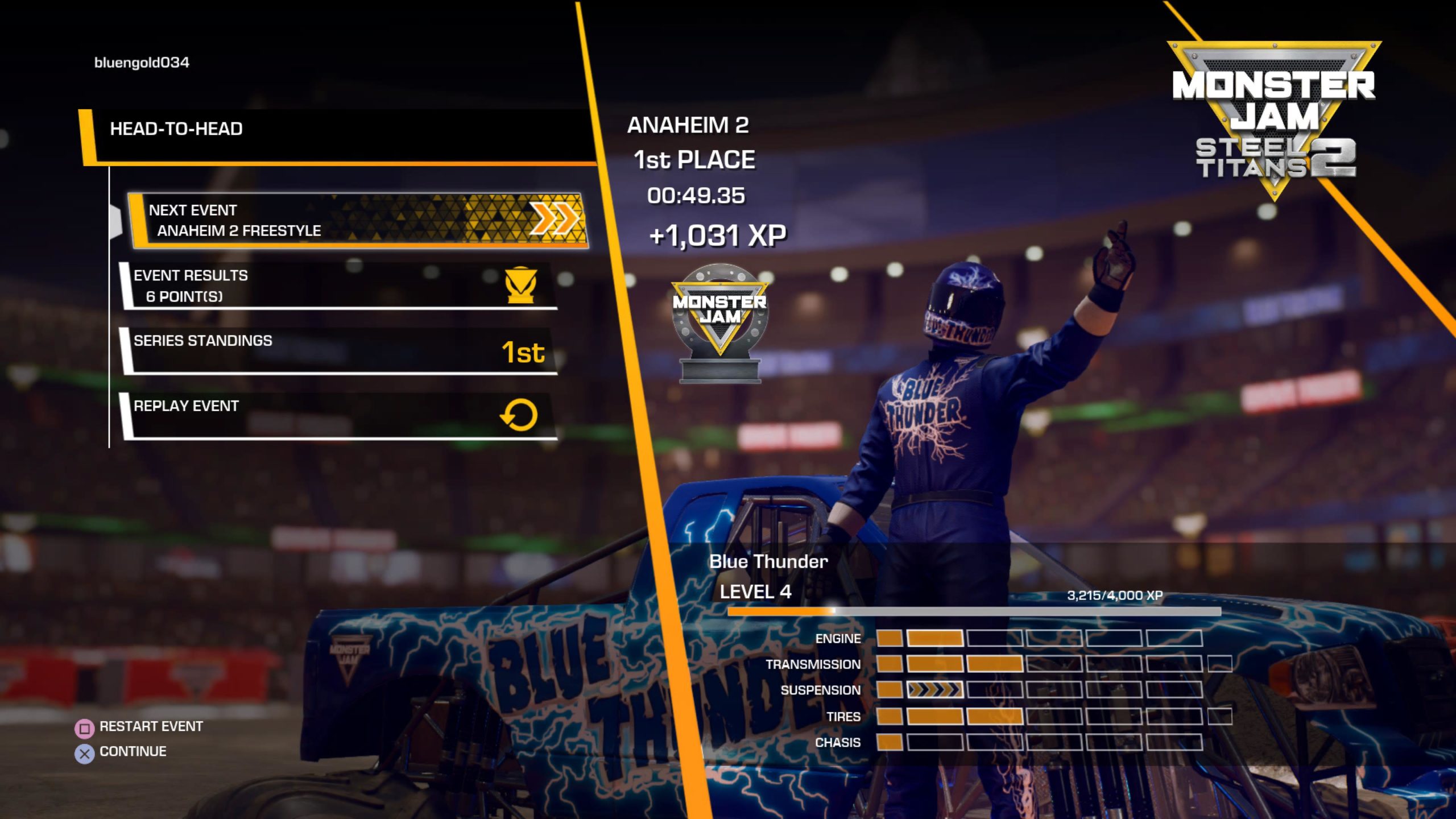 I was a bit hesitant to list the online suite of modes that are included in Monster Jams Steel Titans 2 as something that I liked, but the fact is, what is available to take part in here is enjoyable.

The offerings online are basic in nature, as you will be able to join a public room and race in single or multiple events. If you would rather your experience be a more intimate affair, you can simply invite your own friends and privately host a room. Whether you are choosing to join a public room or simply create a private room and be the host, the options are the same. You’ll be able to play versus, explore, or race, and each one of these options provides a different approach to the game depending on how you want to play.

In Explore mode, you’ll be able to free ride and explore with up to six players. In versus mode, you can choose to do a two-player head-to-head match, a 2-Wheel Skills match, go freestyle, or enter a Timed-Destruction event.

Whether public or private, you’ll be able to invite or join up to six players and do a circuit or waypoint race. Circuit racing is standard racing as you will race a certain length determined during pre-race, and it is a basic A-to-B sort of race The other option is Waypoint racing, and it’s exactly like it sounds. Instead of racing from point A-to-B, the user and the opponents will now race to multiple points laid out on the track and the person to reach each point and finish first is deemed the winner.

While I wouldn’t describe the online offerings in Monster Jams Steel Titans 2 as genre-defining in any way, there is enough here to keep me interested for some amount of time.


What I Don’t Like – Monster Jam Steel Titans 2 Review​ 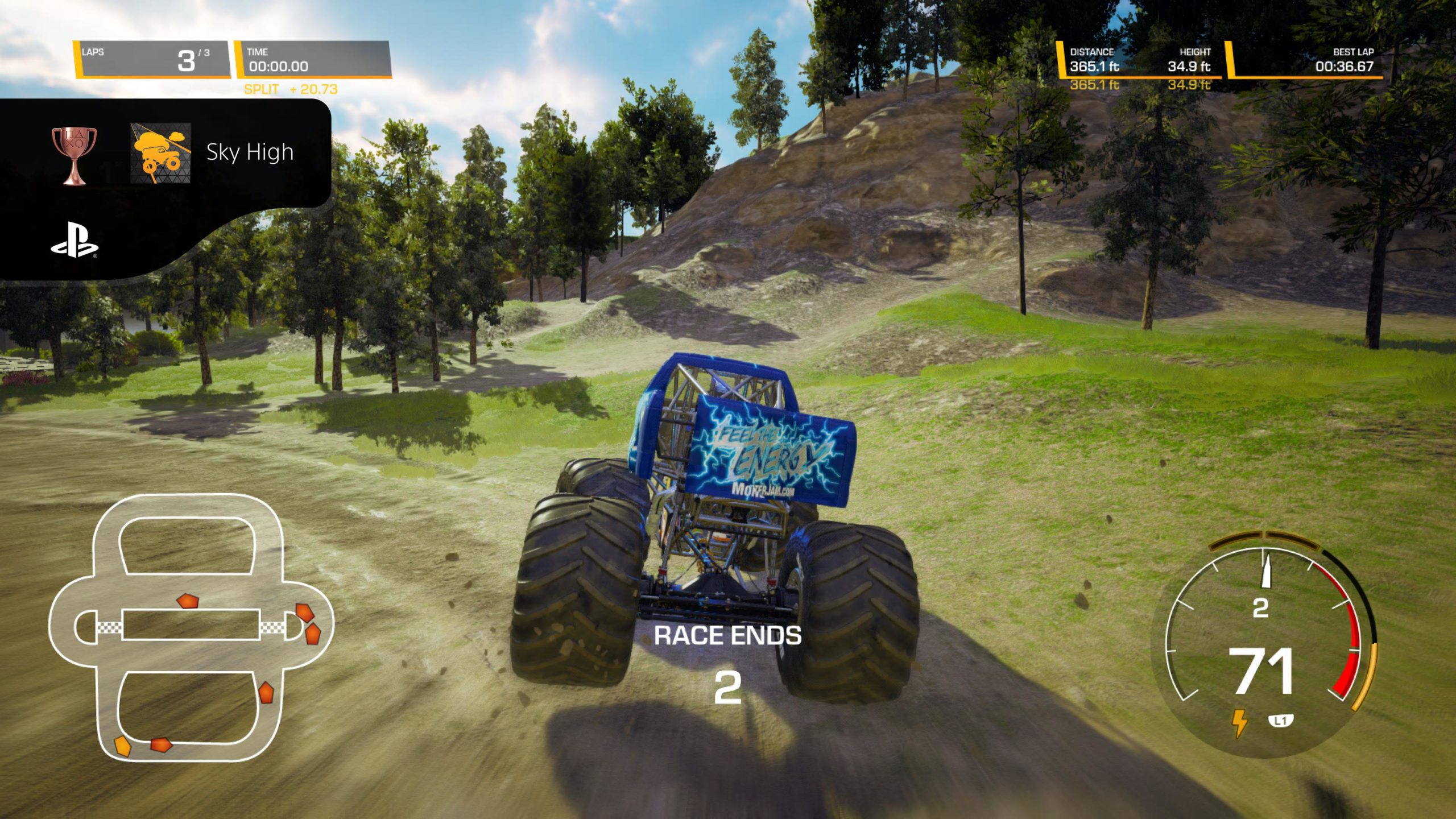 
One of the issues the original game struggled with was the implementation of AI opponents. The AI in the first game was was basically mindless and flawless — if I’m allowed to use those two words together. This meant the AI would play follow the leader. Basically, your AI opponents had no clue that you were also part of that same event unless you were in first. So, Rainbow Studios went back to the drawing board and tried to reinvent the AI for the newest version of the game.

There are some marked improvements that I could both see and feel. The AI is now aggressive and performs admirably while on the track with you. My biggest issue is that the AI opponents are now overly aggressive, to the point where I would consider them relentlessly competitive on the track. This means I would see the AI unwilling to give even the slightest bit of room during a race, and many times I witnessed them directly attacking me to stop me from making a move.

Now, I will take an aggressive AI over a flawless, mindless AI. Nevertheless, there are limits that are acceptable before it becomes too noticeable and diminishes the authenticity. In short, I wouldn’t describe the aggressive AI as a game killer, but it’s noticeable enough that I’m hoping it can be tweaked with a patch soon after launch. 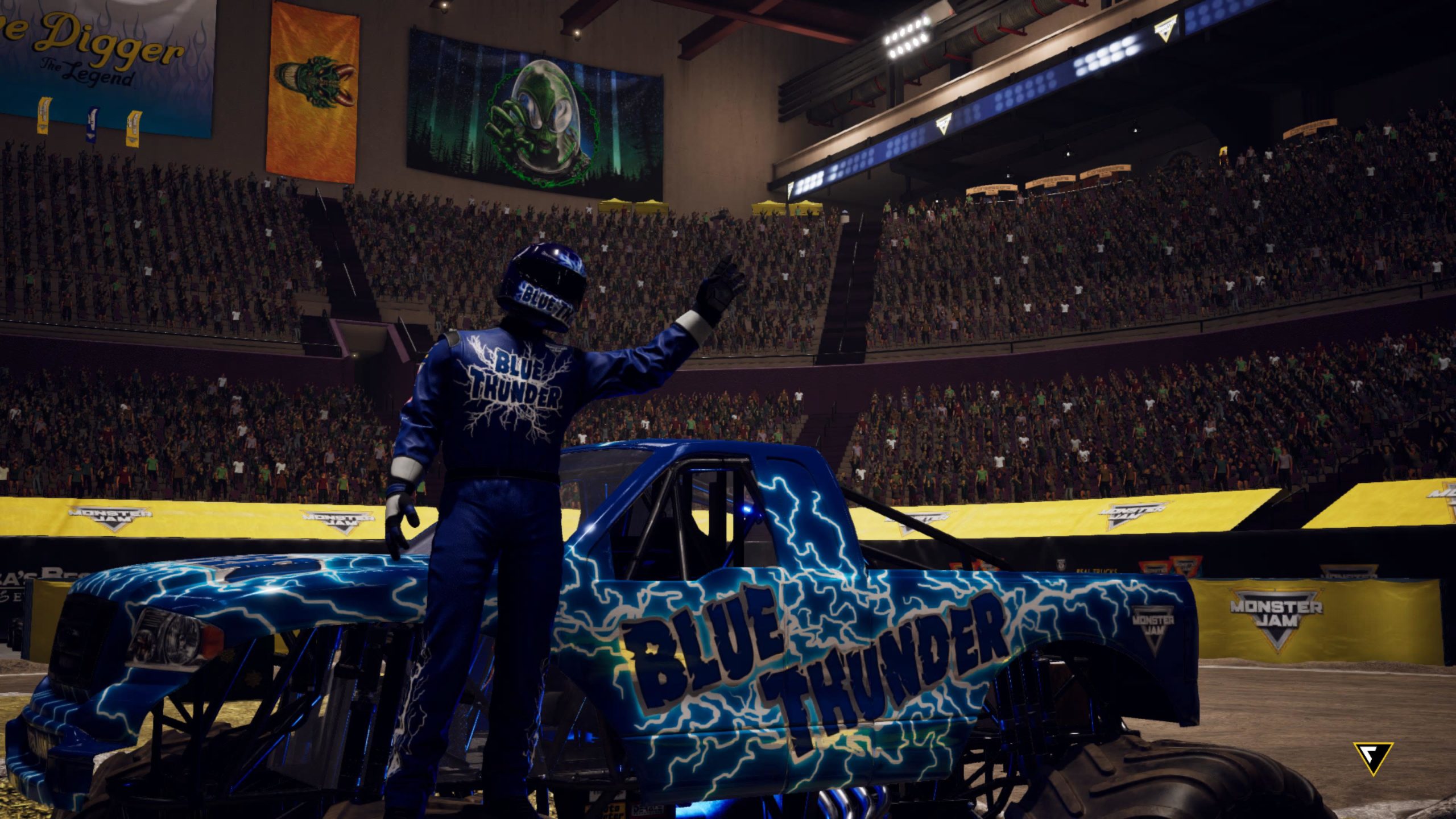 Although not an issue for me, another area that may be problematic for some users is the lack of depth that’s found in a title like this. It does offer a single-player experience, and within that single-player experience there is a pseudo-like career mode, a quick play option, and a split-screen option. After that, the options get a bit thin.

While I enjoyed the career mode option that’s included in the game, as it’s different and unique from the standard fare that is typically provided in a game like this, it’s not going to be considered a fully fleshed out career mode by many. In addition, it would have been nice to have stuff like a creation suite, a sharable track creator, and a world-ranking leaderboard accessible at a click of a button.

As I mentioned before, I understand Monster Jam Steel Titans 2 is not trying to break new ground or compete with the likes of EA or 2K, but even as a “budget” $40 title, I think it’s fair to expect more here. A subject like “depth” is going to be subjective, and so while this aspect of the game doesn’t bother me, it’s obvious enough that it will bug others. 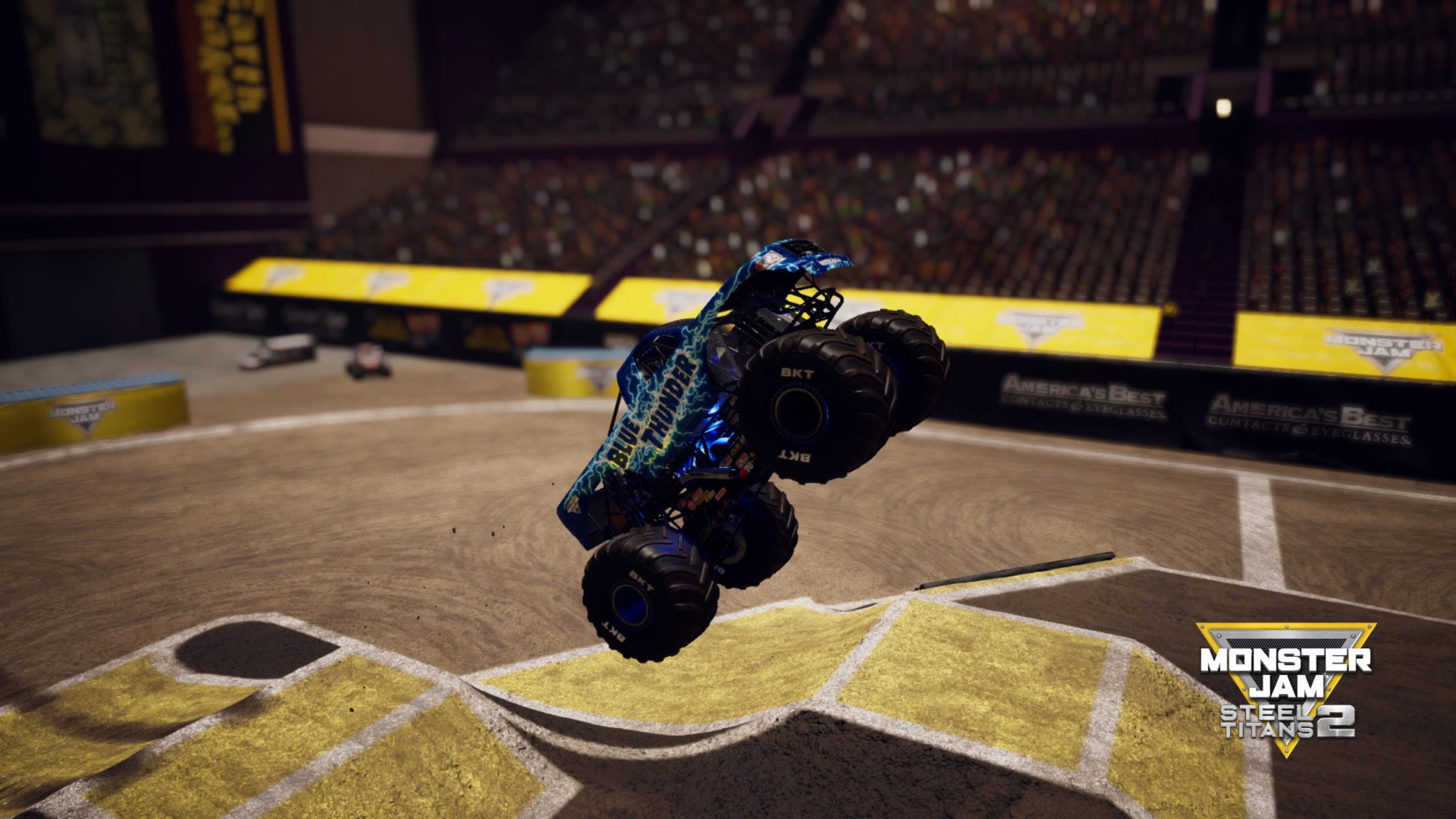 If you have ever attended one of these shows live, whether it be locally or on a national scale, then you have a true understanding of the type of presentation and effort that goes into putting on such a sizeable event of this nature. The trucks and the drivers are the biggest draws and the largest part of the entertainment aspect inside the venue on any given weekend.

That said, the presentation at one of these events takes a backseat to nothing or no one, and in many cases gets the crowd excited in ways that the trucks and drivers can’t. Whether it be pyrotechnics, fireworks, blaring music, or video boards displaying insane and over-the-top graphics, the presentation of the sport at its most basic is a very large component of what makes this genre so exciting.

Sadly, this is one aspect of the sport where Rainbow Studios failed to deliver in terms of immersion and authenticity. That’s not to say there aren’t presentational elements that can be found while playing the game — there are podiums and post-competition driver acknowledgment — there just are not enough. of them The overall experience that is seen in person or on TV does not exist here.

I’m not sure if this is a budgetary issue, a size of team issue, or just merely an oversight, but the fact is a sport like this deserves to have presentation that coincides with the action that is unfolding on the track or on the field.

What Rainbow Studios and THQ Nordic have delivered with Monster Jams Steel Titans 2 is a title that is more fun and accessible than the original, but it is still somewhat flawed. The number of licensed trucks, recognizable names, designs, and venues will end up being the drawing point for this game, and rightfully so. There is a learning curve, but solid physics and consistent handling helps overcome that curve for people of all ages and abilities.

I would consider Monster Jams: Steel Titans 2 an improvement over the first iteration, but I don’t believe it’s a large enough improvement to match what people were hoping for in the lead up to release.

Monster Jam Steel Titans 2 is available for Xbox One, PlayStation 4, PC, Nintendo Switch, and Google Stadia, and retails for $39.99