NBA Ball Stars Review - Puzzles and the NBA Go Together After All Released for mobile platforms via the Apple App Store and Google Play Store on April 6, NBA Ball Stars mixes the league’s superstar players with gem-bursting puzzle gameplay. You take charge of an NBA team, create customized lineups, and strengthen your roster as you make a run for the championship. As you bang out the puzzles, you power-up players, increase offensive and defensive skills, and unlock signature moves. From the developers at Netmarble, most known for games such as MARVEL Future Fight and The King of Fighters, this is the company’s first go at making an NBA game. While my early copy did not have access to all of the modes — namely “Versus” — I was able to play through the mode after the full release. With that in mind, I can now give a full NBA Ball Stars review.


First and foremost, the price tag is an affordable $0. While there are some resources that can be purchased with money (~$1.99 – $99.99), NBA Ball Stars is a free-to-play game that can actually be played and enjoyed without shelling out the extra cash that basically just allows you to level up at a more rapid pace.

Leveling up can have its advantages, most notably in Versus mode, but the core gameplay versus the AI can be enjoyed without having to purchase these resources.


For a mobile game that incorporates a Candy Crush-like gem-bursting concept with canned animations simulating basketball moves, the visuals are surprisingly nice. Bursting gems unlocks moves, both signature moves and standard basketball moves like jump shots, rebounds, etc. Player models are a little on the cartoon side of the spectrum, but the faces and likenesses are very accurate — if we ignore the players who change hairstyles like they do shoes.

The NBA license is also put to good use, with jerseys looking 100% authentic. The NBA courts are not authentic, but they still look good with the team’s logos prominently displayed on both sides of the court. 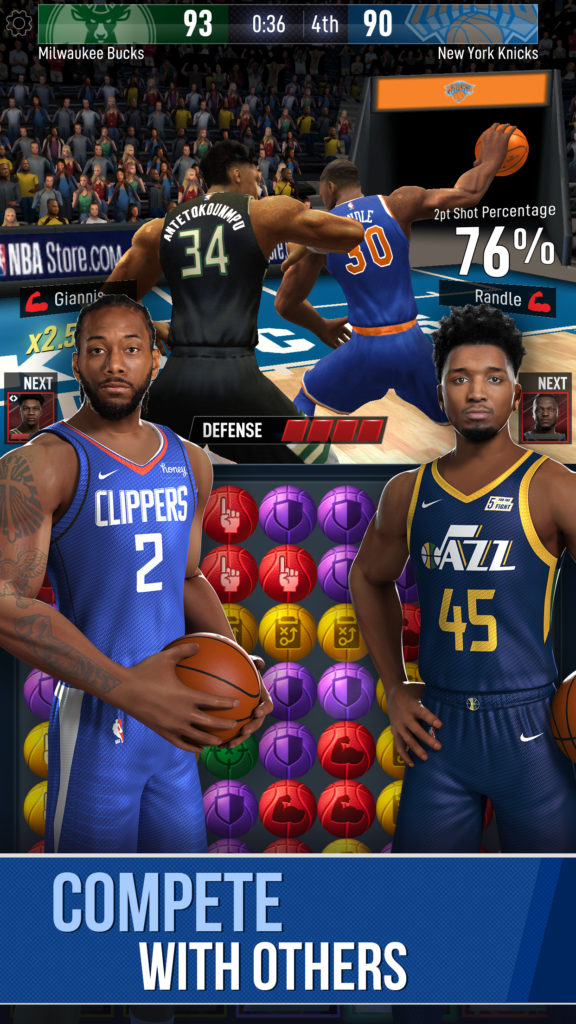 There’s actually a lot going on under the hood in NBA Ball Stars, but thankfully it all comes together with simplistic, intuitive, and responsive menus. Five main tabs are on the bottom of your screen, and then there are sub-menus beneath those that are easy to navigate and read. There is also a nice little tutorial that pops up from time to time that helps you navigate the finer intricacies of the game.

With plenty of rewards, both daily and after you play a game, pop-up icons are an easy way to know when there’s an outstanding task to complete — such as upgrading your players’ skills or equipment.


Being able to play a full 82-game season seems like it could be overload, but given that you’re only playing the last two minutes of every NBA game means you can fly through games. There’s no player stat tracking, which makes sense given that you’re only playing two minutes of a 48-minute game, but there’s a schedule, standings, and pregame screen that details a little about your opponent, namely the Team Overall and what type of offense being run. Both of these elements are important factors that help you determine how you want to mold your team for that game.

While I have not made it to the playoffs just yet, the difficulty of the opponent seems to scale as you play more games. In other words, things start off feeling easy enough and then the difficulty ramps up accordingly. This is probably a design choice to not frustrate new players as they get acclimated to a new game, but not being able to choose a difficulty level could become a factor as you get better at NBA Ball Stars.


I missed out on the Candy Crush craze from a few years ago, and even though I’m OS’ resident soccer fanatic, I’m not a huge Ultimate Team player. Despite this, I really enjoy how Netmarble mixes the best of both worlds. I’ve always liked puzzle games, and I like the incorporation of how NBA Ball Stars lets you unlock random players via its “Draft” system.

The unpredictability of who is going to be joining your team and how you can incorporate them into your offense is fun. Leveling up players and unlocking new offense types is a cool feature that allows you play to your team’s strengths while also taking into account which players/lineups will help you on the defensive end.


Playing a full 48-minute game with gem bursting and puzzle solving would be asking too much. Instead, Netmarble designed the scoring concept around whichever team has a higher overall. For example, if you’re the higher-ranked team, you will be the team that starts with a lead once the action kicks off. This makes sense on some level, but there are two major issues with this:

Perhaps as Netmarble irons out the experience — and the company has shown true commitment to future expanded modes, bug fixes, etc. — it will rethink how the Versus mode works. 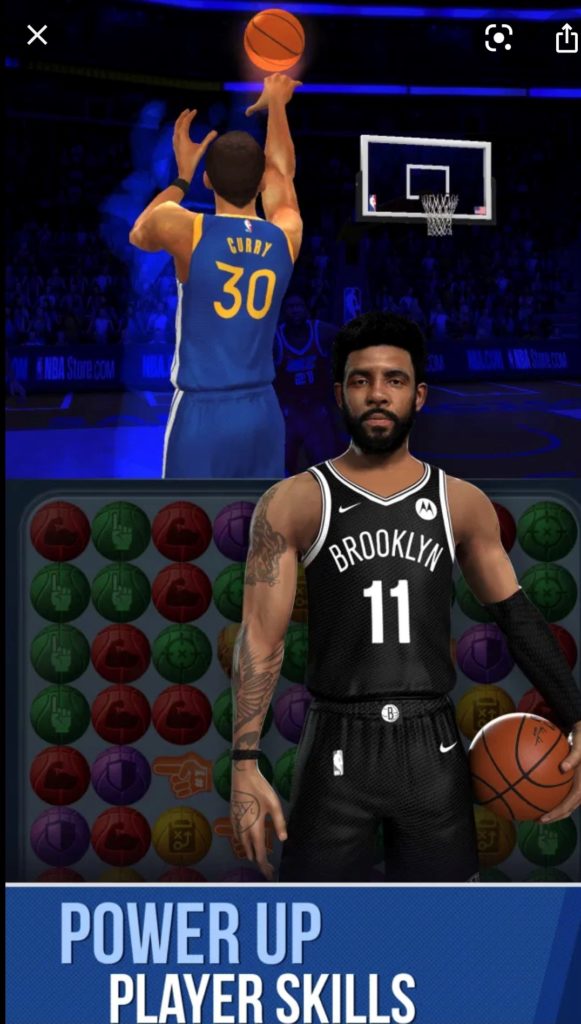 
In theory, skill moves are relatively cool in NBA Ball Stars. They can be signature moves and/or things like “forcing a turnover” when on defense. These sequences often play out through unique canned animations. These can be unlocked by bursting certain gem combinations but occasionally — especially in Versus mode — they seem to be available to your opponents for their initial move.

If this happens, you are put at a huge disadvantage, especially if your overall is lower than that of your opponent. Of course, this could work in your favor if you’re the one with the skill move from the start, but that does not make it fair.

I’m not huge on mobile games in general. I come from an era of sitting in front of your TV and playing console-based games, with my phone only used for text/phone calls, random internet searches, and the hunt for sneakers. I don’t to spend too much time gaming on my smaller iPhone screen as I’d prefer to spend that time with the PS5 and my gaming PC.

With that being said, I won’t be deleting this game any time soon unless future updates take it south. I find myself squeezing in a few games at random times during the day, especially in certain rooms within my house (wink, wink). NBA Ball Stars is a simple concept at its core, but there are a seemingly endless number of ways to build squads, improve players, and compete in two different modes. With it being a free-to-play game, it’s a no-brainer if you like both the NBA and Candy Crush-style games.

The post NBA Ball Stars Review - Puzzles and the NBA Go Together After All appeared first on Operation Sports. Kevin Groves https://www.operationsports.com/nba-ball-stars-review-puzzles-and-the-nba-go-together-after-all/