Project CARS 3 Review: A New Direction for the Series That Mostly Works Out

Project CARS 3 Review: A New Direction for the Series That Mostly Works Out It has been a rather bumpy ride for the London-based Slightly Mad Studios ever since the announcement of Project Cars 3 because its new direction was met with very little fanfare. A series best known for its simulation-based racing is now heading towards a more accessible style with hopes of offering a broader appeal to a larger audience. This is a huge risk and endeavor (in my opinion), especially considering this is the third iteration of the series and the last one solely developed for the current generation of consoles. Did the move to this new hybrid racing style work out for Slightly Mad Studios, or did it send the series back to the garage? Let’s get into my Project Cars 3 review and find out.


One of the biggest complaints from PC1 and 2 was the handling, at least for me. The two previous games allowed you to adjust the settings of the wheel or controller, but none of the setups ever really worked across the board for each vehicle. 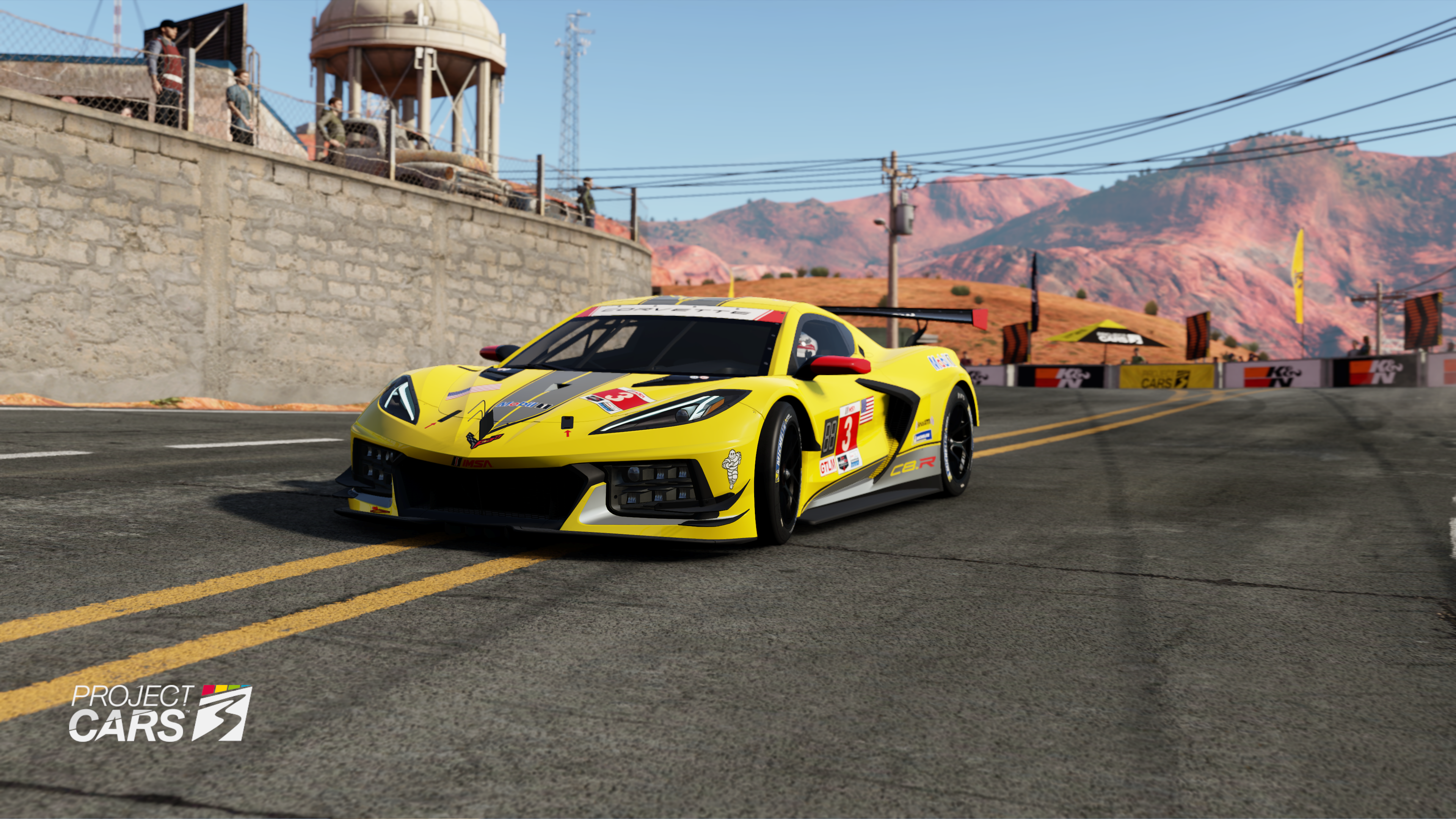 That issue seems to have been rectified with the release of PC3 as the handling feels solid out of the gate. Now, a lot of the cars react differently depending on the weight, their build type and torque, but I found it easy enough to quickly adjust for each new car.

What’s interesting is that within Project Cars 3 I noticed a blending of other titles that I have raced over the years, and you can feel the influence of those games in PC3. Games like Gran Turismo, both Forza and Forza Horizon, and the the old TOCA series from the PlayStation 2 and Xbox days really linger here. Obviously, there is still a bit of carryover from the two previous versions of the Project Cars series, but it’s not as obvious as you would think.

In the end, Slighty Mad Studios has done exactly what it set out to do here by making PC3 a more accessible racer to the masses by toning down the sim aspects and focusing more on the action that is taking place on the track.


The AI opponents in Project Cars 3 aren’t perfect, and at times feel they oddly over-optimized or under-optimized for the race at hand. That said, they still perform much better than the AI opponents from either of the last two games. There is a full understanding and awareness that you are on the track with them, and sometimes they’re even willing to take a cheap little sideswipe at you if you’re being too aggressive.

They drive like they know what is on the line for each race, and just because you’re blowing up their rearview mirror, it doesn’t mean they are going to just pull over and let you have their current spot. Basically, it’s not all rainbows and unicorns when it comes to the AI in Project Cars 3, but the AI is solid enough and will give you a human-like “run for your money” sort of performance


PC1 and 2 did a solid job of delivering a career-style mode, and Project Cars 3 picks up exactly where those games left off by taking me down a deep and varied path filled with races, challenges and unlocks.

Even better, the series of events all felt unique and different enough that I kept wanting more, which should be the goal of any career mode in any title. 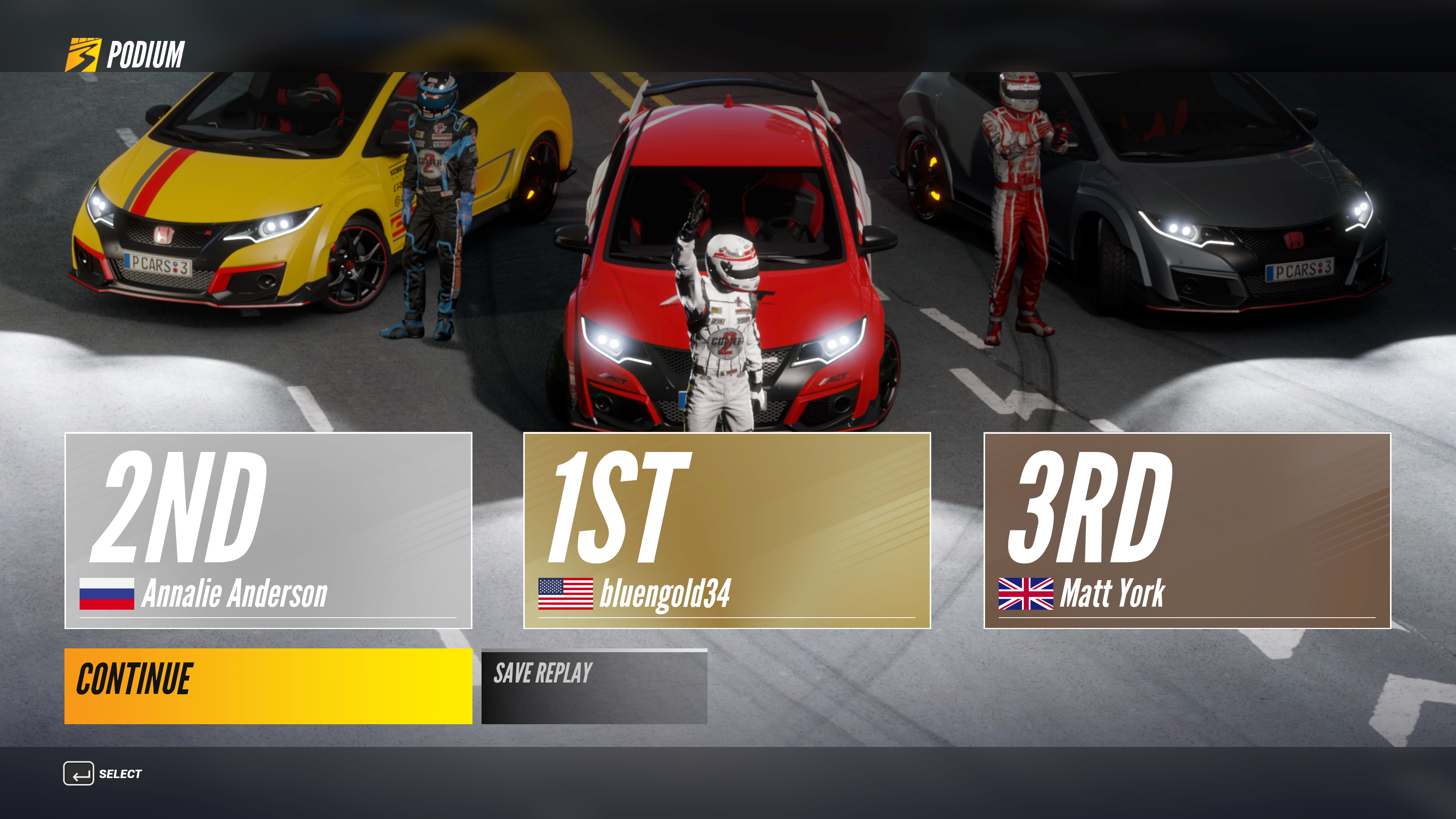 Career mode in PC3 starts you off in the lower-rated E-series, which consists of races and challenges that are a bit on the easy side in terms of racing, but there were still times I had to focus and push myself to accomplish the end goal(s).

As you progress and move up, you will have the chance to race at a wide variety of venues, race in an amazing collection of cars (assuming you have the money to buy them), and participate in a number of different styles of racing.

What adds to the challenge is the car rating system and the ability to upgrade each vehicle along the way.


It’s always great to fire up a game and see a large set of ways to play a game, and Slightly Mad Studios does an exceptional job of providing a deep variety of ways to enjoy its newest release. Whether it’s the career mode I wrote about above, or the list of modes I’ll mention below, there really is a wide range of options here.

Multiplayer – MP allows you to jump in with random people and just race, look for a scheduled race with different offerings, or you can create a private lobby with the settings and invites of your liking

Rivals – As the game states, “Rivals is about high scores and fast lap times.” You will be competing against others in daily, weekly and monthly challenges, and each one has a unique online scoreboard for you to try and rank your way up. 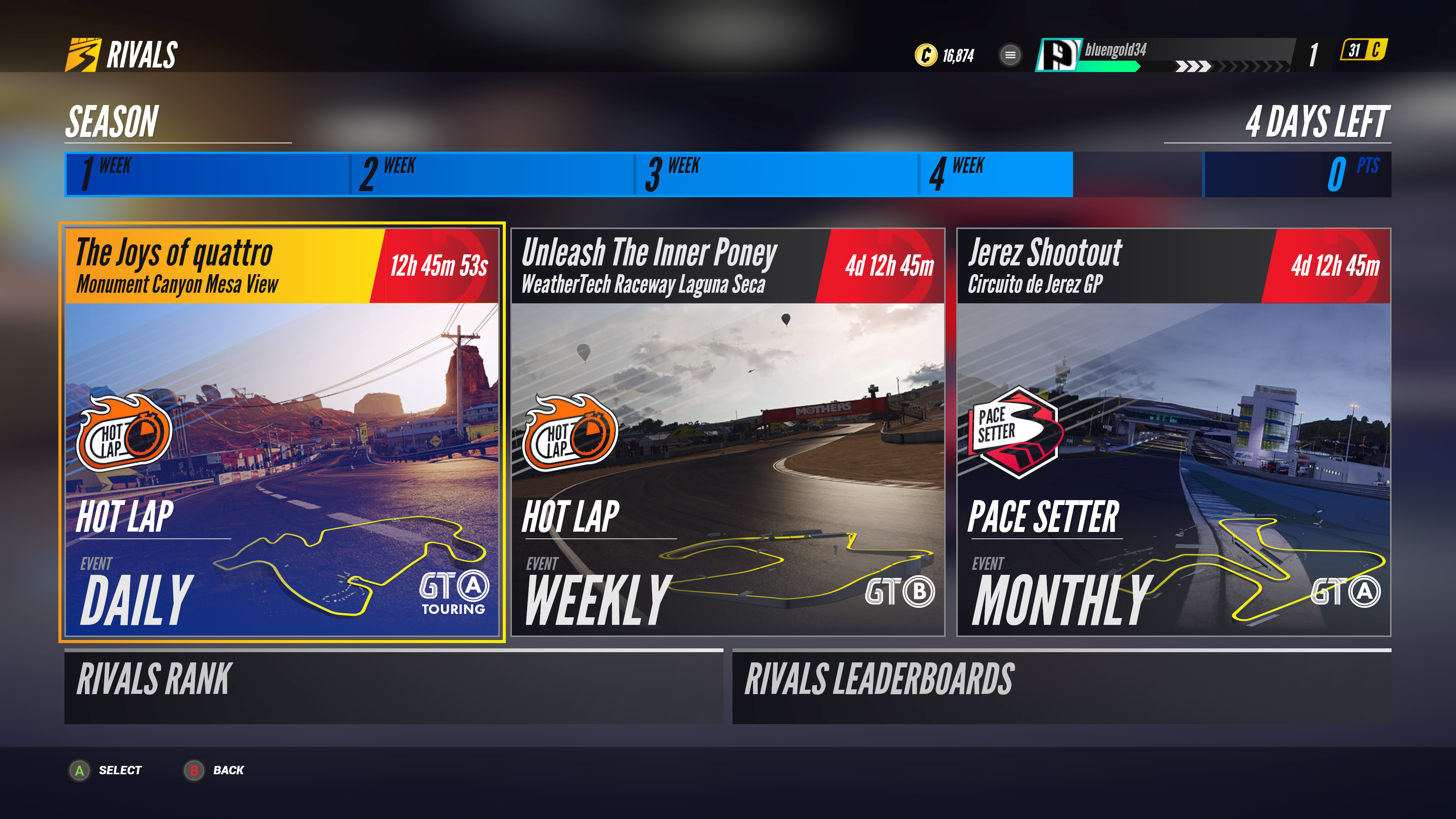 Garage – this is where you will pick your cars for different events, upgrade and tune the car you currently own, and your garage is also where you can customize your current ride with some fresh new paint, new decals or a new style altogether — if that’s your thing.

Showroom – Now you may be asking “how is Showroom a way to enjoy the game?” When there are over 200 cars at your disposal fully rendered in wonderful detail, it is easy to get lost in the Showroom just looking at the fully interactive vehicles and seeing what they carry under that hood.

Custom Event – Last, but not least, is a custom event. It’s exactly what you think this would be as the custom event allows you to pick a car, pick a track, pick the race details and opponent, and hit the track.


Project CARS 3 Review: What I Don’t Like​
Sim-Based Removals Beyond Basic Gameplay


As a huge fan of PC1 and 2, I was a bit thrown off by the decision to remove basic features like car damage (cosmetic only now), pit stops, tire degradation and true vehicle setups. Along with what I already mentioned, Slightly Mad Studios also removed the ability to practice and qualify before a race.

For me, the removal of practice and qualifying is a much bigger issue than the “dumbing down” of car adjustments and a poor damage model. For many, the ability to practice is the ability to gain car and track experience before a race, and that should always an important aspect even in a sim/arcade hybrid.

That’s a heck of a list of options to strip away from a feverishly loyal group of fans while still expecting them to remain loyal. Some of the options removed will mean more to some than others, but I struggle to come up with a solid explanation that would and could justify the removal or regression of all of these options.


As we move towards the end of the development cycle for the PS4, it’s usually a time where developers fully grasp and utilize the power of a console. In the case of PC3, it feels more like a regression.

Now, this is a series that has never been considered a leader in regards to rendered environments and vehicles, but the series has still taken a turn here, and not for the better. I spent a solid amount of time wondering if the digital copy I had received on the PS4 Pro was corrupt in some form due to some of the graphics I witnessed in-game. What’s even more strange is at times the game can look extremely good when not in a race, but then you’re hit with a harsh reality of vehicle and environmental details that suffer greatly from poor anti-aliasing and optimization. These sort of moments can bring the whole experience crashing down. 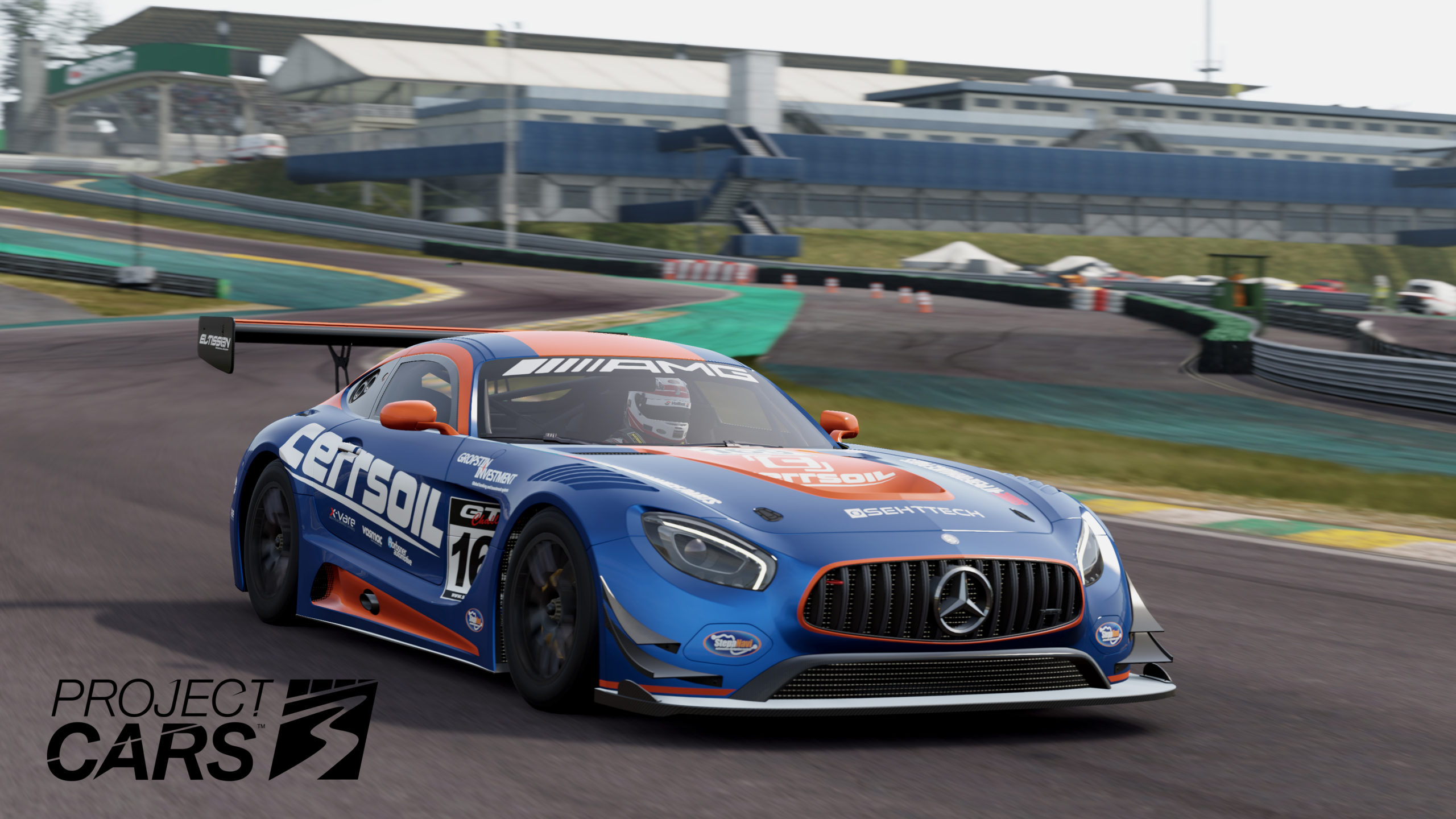 Compounding the issue(s) even further is the fact other racing series like F1, Gran Turismo, Grid and even NASCAR Heat (to a degree) have found a way to enhance the look of their games while maintaining solid frame rates.

While there may be some issues on the console, that opinion changes when running Project Cars 3 on my PC with souped up hardware. It looks amazing and ran well. The moral of the story here is if you have a solid gaming PC then that is the route to go for Project Cars 3.

I am not sure if the new direction that Slightly Mad Studios and Codemasters decided to travel is going to work out the way they hoped, but that doesn’t negate the fact that Project Cars 3 offers a lot of fun hybrid-style racing and an incredibly deep career mode.

If the game were released under a different name, the outlook might be much more positive right now. There are over 49 fantastic and iconic venues, an amazing array of vehicles — over 200 to be exact — and a deep gameplay experience for people. It’s just not the gameplay experience we remember from the previous two games.

In the end, I will always judge a game based on the amount of fun I had with it, and I can say that Project Cars 3 delivered nicely on that front.

The post Project CARS 3 Review: A New Direction for the Series That Mostly Works Out appeared first on Operation Sports. Robert Kollars https://www.operationsports.com/project-cars-3-review-a-new-direction-for-the-series-that-mostly-works-out/