Six Reasons Rocket League Still Rules After Six Years When Psyonix first released a sequel to Supersonic Acrobatic Rocket-Powered Battle-Cars back in July of 2015, there were few indications that Rocket League would go on to become the massive hit it is today. Rocket-Powered Battle-Cars may have been downloaded a couple million times on the PlayStation Network, but it also received decidedly mixed reviews from critics, and it would take seven years for a sequel to even be made. When that next game was finally unleashed, that sequel wisely came with an abbreviated title in Rocket League, and it also had improved gameplay and innovative physics that would make a game that is essentially soccer but played with rocket-powered cars into a global sensation that is still being played every day by millions.

With the game just recently celebrating its sixth anniversary, it seems like an ideal time to reflect on the game’s success by outlining six different reasons to still love Rocket League.

How Physics And The Gameplay Loop Tie Together


Regardless of what mode you happen to prefer playing in Rocket League, the basic idea is typically going to be the same no matter what: use your vehicle to push the ball (or puck) into the goal or net in order to score a point. The person or team with the most points after five minutes of play will be declared the winner. There’s generally no best two out of three rounds or anything like that, so you only get the one chance to win the match within that time limit. If the match is still tied after those five minutes, the game moves to a sudden death overtime period that will last as long as it takes for someone to put that fateful final tally on the board. This format keeps matches from ever running all that long, and it allows you to quickly hop into games when you don’t have a lot of time on your hands but are still looking to get in a fix of Rocket League.

Much has been made about the physics within Rocket League as they are often described as “floaty” and certainly aren’t intended to be realistic exactly, which would be impossible anyway considering nothing resembling Rocket League could ever actually exist in real life. As expected, it does take some time to adjust to not only how the ball moves through the air like a balloon, but also how it caroms off your vehicle depending on how it happens to be struck. There’s a marked difference between how the ball zips with velocity when struck by the body of a vehicle with some speed behind it versus how much easier it is to control the ball when you’re largely stationary and then are able to play it softly off the wheels of your ride. One of the key challenges to the game is negotiating between these two extremes and developing instincts to help you determine the best way to play each ball in front of you depending on the circumstances. 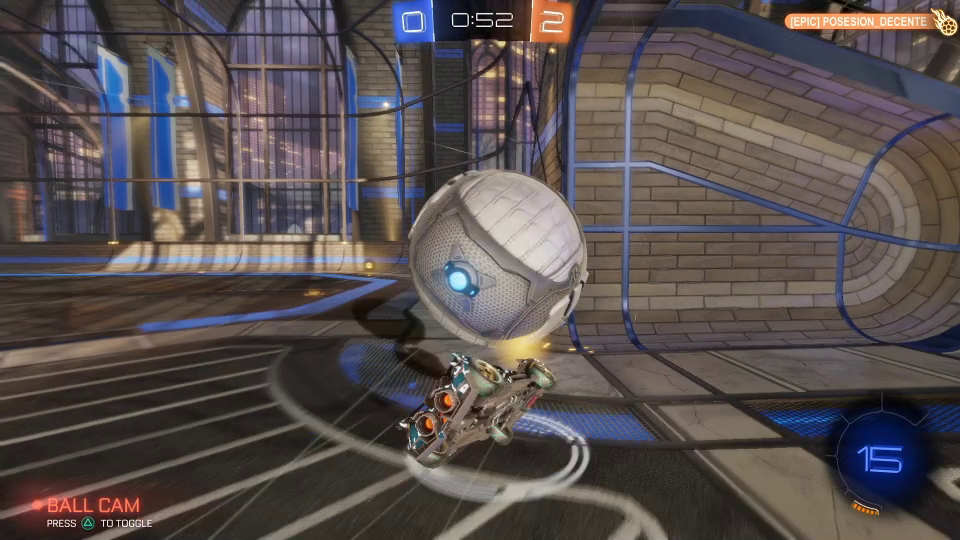 How The Controls Stack


When you start out in Rocket League, your biggest concern is bound to be simply lining yourself up with the ball to actually hit it. Either way, you’ll likely whiff on a lot of shots at the outset of your career. In time though, you’ll come to understand the many intricacies of the controls at your disposal in the game, and why it’s imperative to regularly gather fuel so that you can unleash your rocket boost at the appropriate times. This rocket boost can be crucial in getting to the ball before anyone else thanks to the accompanying speed burst, and it also will allow you to get airborne to compete for balls high above you. Plus, you can demolish your opponents by colliding with them while using your rocket boost — and that’s undeniably fun.

As vital as utilizing your rocket boosts can be in the game, there are other more subtle aspects of the controls that can be quite impactful as well, and this starts with basics like knowing how to maneuver your vehicle in certain situations. There are moments in a match when you’ll need to use a hairpin turn to get yourself facing in the right direction when a ball is headed your way. Even throwing your vehicle in reverse can be a smart play at times when you sense a ball is going to sail over or by you otherwise.

What’s great is that even if you don’t have any fuel for a rocket boost, simple tasks like jumping for a ball can become an acquired skill, especially when lining things up gets even trickier if you’re leaping off a wall (or ceiling) to try and make a play. In the heat of the action, things can obviously get a little hectic, and the challenge of knowing when to use all of the available controls is what keeps every match interesting.


It’s well established by now that it’s not enough for modern games to simply provide a fun experience via crispy gameplay. There also needs to be some sort of way that you can set yourself apart while playing the game. Rocket League understood this pretty early on and has developed a variety of ways that can help you stand out by pimping your ride with some unique adornments and eye-catching accessories. This starts with the size and shape of your vehicle, and it extends to things like toppers for the roof, decorations for the antenna, and special rocket boost trails that determine what comes out of the exhaust pipe.

The game has introduced a lot of different ways that you can obtain all of these different items too, whether that’s through earning them as random rewards by playing games or purchasing specific items in the store with credits that you obtain by spending real money. You even have the opportunity to trade in items that you don’t want for a chance at something else, or you can take that trading online and find someone to swap with if you both have items that each of you happens to desire.

That said, in the years that I’ve spent playing the game, I still haven’t managed to be rewarded with any sort of appealing goal explosion. However, I also haven’t spent so much as a dime on any items. In other words, it looks like it might be necessary to fork over some cash for a good one — or else find someone who’s willing to trade me one.

There’s also a Rocket Pass that you can invest in for a fee in order to receive premium rewards for each time you manage to level up or, if you’re like me and don’t want to spend any money, you can be content with receiving free rewards for every few levels you achieve. Importantly, all of the items in Rocket League are purely cosmetic, and so none of these will give you any sort of competitive advantage.


Over the years, Psyonix has been creative in dreaming up different ways to play Rocket League to keep things from ever getting too stale for anyone who’s getting tired of the game’s basic format. If you’re interested in playing the game competitively, you may only have the options of playing either 1-vs-1, 2-vs-2, or 3-vs-3. But there are plenty of other choices if you just venture over to other available menus. In the casual section, for instance, you can add one more player to the mix and engage in some chaos with a 4-vs-4 match that will require a little more teamwork if you want to succeed.

Things branch out in even more creative directions if you take a peek into the Extra Modes menu, where you’ll encounter some ways to play Rocket League that are almost entirely different than the one you play competitively. Snow Day and Hoops modes turn the game from an adaptation of soccer into one that instead more closely resembles that of hockey or basketball. Elsewhere, in Rumble mode you’ll have 11 unique power-ups that you can collect and deploy in your quest for victory, and Drop Shot mode takes the game in a whole new direction by having you use an electrified ball to destroy floor panels of your opponent to achieve success.


Playing a game online is never going to be all that much fun if you’re continuously facing players and teams who are much better than you are and, to a certain extent, the same is true of going up against people who are significantly worse than you (although I will concede that winning is always going to be better than losing). Rocket League‘s competitive playlists mitigate this potential issue by having different tiers based on your skill level, ranging all the way from bronze on the low end to grand champion on the higher side. At the end of each of your games, there’s always the potential that you could either be promoted or demoted depending on what happened in the previous contest.

For the most part, this system works pretty much exactly as intended. You’ll likely find that you’ll slowly but surely begin to climb the skill levels as you play more and learn all of the nuances of the game that set the superior players apart from the lesser ones. However, should you choose to use the matchmaking to also find a teammate, there will inevitably be times where you’re saddled with playing next to someone who doesn’t seem to be able to compete at the same level as you. This may cost you a game or two, but these things usually even out in the long run.

Similarly, you may encounter opponents engaging in “smurfing,” a practice where elite players deliberately attempt to match against inferior ones, but this happens infrequently enough that you’ll tend to find your skill level is pretty accurate overall.


The Rise Of A Rocket League, League


If you’re ever on a nice winning streak and perhaps starting to believe that you might be able to compete at the highest levels, it might be a good idea to be humbled by watching some of the best Rocket League players in the world. After you do, you’ll likely realize that you’re actually worlds away from being one of the best around. It was only shortly after Psyonix released the game that Rocket League joined the ESL and became an officially sponsored esport, and in September 2015 Major League Gaming announced the first season of the Pro Rocket League. Since then, there have been a number of tournaments, including partnerships with NBC and Tespa, a collegiate esports organizer that would hold the first collegiate tournament in 2017.

With all of these competitions and tournaments, it’s easy enough to tune into matches played by some of the best of the best, whether that’s online on a streaming platform like Twitch or even on cable television. Once you’ve played the game and know the limitations of your own abilities, it can be an eye-opening experience to see some of the maneuvers and strategies utilized by professional players, as it’s not all that different from witnessing top athletes play their sport. These players are able to routinely pull off spectacular aerials, and it’s not all that uncommon to see games where the ball barely even touches the ground. Should you be observant and pay attention to details, you may even be able to file away some of their tactics and slowly integrate them into your own game.